Saranpoh Mohammad Farid Hamidi, The General Attorney of the Islamic Republic of Afghanistan during a training program “Evaluation of Postponed Cases” persist on lawful and professional performances of the prosecutors and said that we have to seek a fair solution for those postponed cases.

This ceremony was held on 7th August 2019 at the AGO Darulaman campus in which deputies of the Attorney General and directors of the prosecutor offices of the center and provinces were also present. 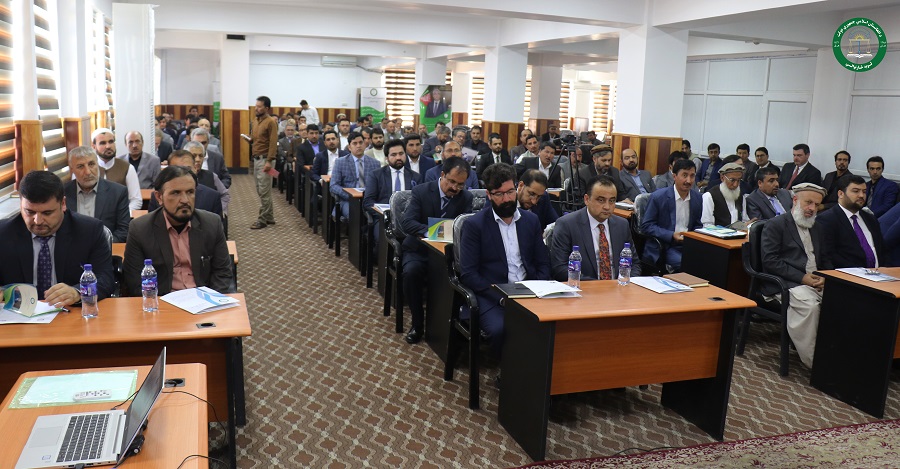 Mr. Hamidi said that solving the postponed cases is part of the reform agenda of the AGO and ordered to authorities in center and provinces to specify and cleared the fate of the postponed cases in next two to three months, to save the Afghan people from being wandered.

Hamidi added, “we have a fair organizational chart, opportunities, facilities, commitment and a powerful professional capacity within AGO to ensure justice and give a hope and confidence for Afghan people.” He also talked about the creation of a General Directorate for Combatting Harassment and Annoying at Governmental and Non-Governmental offices within the AGO and added that approval of this issue by the president of the Islamic Republic of Afghanistan shows the strong support of the government to the Afghan citizens.

He further added that with the creation of this Directorate, I assure the people and families of those government and non-governmental employees that no misbehave, harassment and annoying will be tolerated.

The Attorney General also points out the issue of revenue collection from those entities, individuals, and companies that are indebted to the government. According to him, based on the direction of President Ashraf Ghani, sometimes ago a commission was organized under the supervision of the Deputy of Attorney General’s in Anti-Corruption Affairs with a mixed delegation of related administrations which collected around 500 million AFN in two months.

At the end of his speech, the Attorney General emphasized that during the election we have to be impartial and independent and called on every staff of the AGO to obey this principle. Mr. Hamidi added that addressing election crimes is a special jurisdiction of the AGO which has been manipulated by the Election Law and Penalty Code and ordered the prosecutors to investigate such cases with full impartiality and without political remarks.